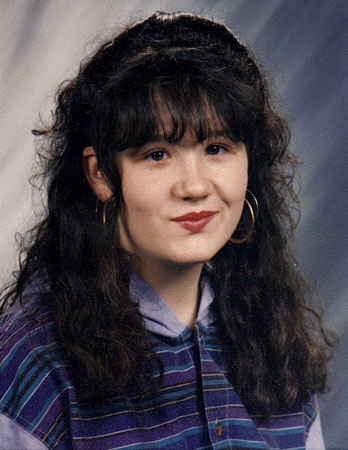 That’s my sister, Krissy, as I called her. This is the last picture I have of her, it was taken at school about a week before she was killed. It came in the mail from the school about two weeks after the funeral. She never saw it, but you can…

As the holiday of Halloween draws near, it felt like the right time to tell my own family experience with a Juvenile serving Life without Parole. I distinctly recall throwing away the candy she collected trick or treating a week before she was murdered, so the two stay together in my mind.

It was a difficult time for my 15 year old sister. She had been secretly seeing a boy from school, as she was sure my family would not accept him. They were together for several months before he broke it off. Unfortunately, by the time he broke it off, she was pregnant. She carried that secret for a few months, and finally decided she had to tell my Mom the truth. I remember being 15 and thinking that if you ignored stuff that bothered you it would just go away. This wasn’t that kind of problem…

My sister set up a meeting in a school yard with her former boyfriend, who she still loved, to talk about the baby. She had resolved that she would meet with him, and then tell our Mom that night. That never happened, we found out about the pregnancy, and the boyfriend from the Pittsburgh Police Department. We found out the details from her diary, which also led them to her murderer.

Her killer, also 15 at the time, brought a kitchen knife to the meeting. He would later tell police he planned to kill himself after the meeting. I don’t know what was said at that meeting, I’ve often wondered how she spent those last few minutes of her life before he attacked her.

At some point, he lashed out at her with the knife he “just happened to have with him”. He proceeded to stab her 11 times about the neck area and punched and kicked her repeatedly. After he had stabbed her to the point that she would bleed to death in that school yard, he zipped up her jacket, watched her ‘twitching’ on the ground and departed for home. A seven year old neighborhood boy would find my sister dead in that school yard and go tell his Mom.

When my Mom reported her missing that evening, her friends lied about where she was. They thought they were doing her a favor. Shortly after calling the Police, they came to my Mother’s home with a ring my sister had been wearing to do a preliminary ID. That is the moment, the point where all the air is sucked out of your life and it sort of becomes like you are watching a movie. We then had to decide who would go do the identification, thankfully my sister’s step mother volunteered. The media was calling our homes and knocking on doors looking for quotes. We had to keep the funeral quiet to avoid news cameras at the grave site.

The strain and emotional impact this had on my Mother was just too much. She was just 54 years old when I buried her with my sister.It was 9 months after my sister’s death, and one day before the trial started.

The trial process is intended to help you find closure and justice. In some ways that is true. But, the reality is, it is just day after day of pain and revisiting the most painful thing you’ve ever experienced. Shortly after the preliminary hearings, the District Attorney told us she’d be pursuing adult charges and a life sentence due to the violence and premeditation of the crime.

We sat through juror selection, trying to find people who hadn’t heard all of this on the news and formed an opinion. And then the trial began. I can still vividly describe the images of my sister’s body that the coroner used during his testimony. I actually had nightmares about it for months after the trial ended. The police explained that they were able to identify shoe prints on her pregnant belly from her killer. He, had gone home, showered, and went about his day after leaving her, with his child inside her, to bleed to death in the school yard.

In the end, after several weeks in court, he was found guilty, and subsequently sentenced to Life without Parole. We all walked away with the relief that the justice system had provided the best they could for us to move on. We believed that we would never have to revisit the judicial process for her case. We thought we could try to find our way out of the emotional abyss this had created. We accepted the word of the justice system that he would never be free.

As I write this, the momentum and media focus on the ‘poor’ kids serving these sentences is rampant. Both the Federal and State governments are investigating changes to these laws that allow life sentences to Juveniles offenders. It is perfectly understandable that people who have never heard a coroner describe their loved ones last moments might support this kind of action. If it must be that the courts will go that way, it is morally imperative that any such decision not be retroactive. We had our verdict, and it was just, we should not have to testify and relive that pain every year, or every so many years in order to preserve what the law promised us to be.

I pray that no one else ever has to go through this experience, and if they do that the justice system is there to offer them what is just.